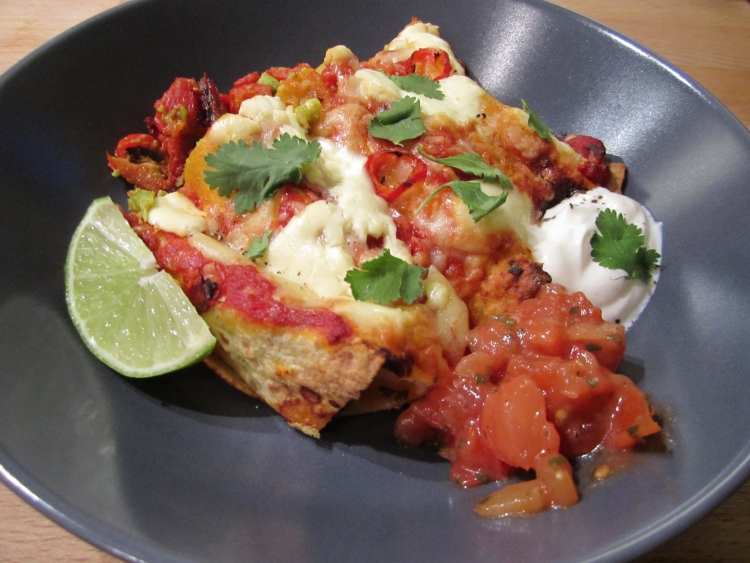 I love discovering new ways to cook Mexican food; Nigella’s Mexican Lasagne was an unexpected gem and has worked its way into my rotation of recipes. I’m certain that Stuffed Tomato Tortillas will too.

The recipe comes from Jamie’s America and involves dipping corn tortillas into tomato sauce before either filling and eating them straight away or baking them in the oven. The idea of topping them with cheese that turns golden brown in the oven (like in the Vegetarian Chili & Homemade Salsa recipe) was just too tempting so that’s what I did. I was a bit perplexed about spooning sour cream over the tortillas before baking them but I wanted to stay true to the recipe and hopefully find a new topping that might work on other dishes. I’d previously discovered that Jamie Oliver’s creme fraiche/parmesan white sauce works wonderfully on lasagne or any baked pasta dish and this sour cream/cheddar topping is just as good for Mexican dishes. I think it's the cream and cheese combination.

Another unexpected discovery: baked avocado is delicious. It’s more subtle than my usual filling of vegetarian chili but the combination of peppers, avocados and lime is lovely.

I’ve added a red pepper to the ingredients list but it is optional. I had one in the fridge and thought it would accompany the avocado filling nicely.